In Switzerland, the RECARE researchers tested the effectiveness of reducing soil erosion by using a Dyker to produce small dams between ploughing furrows in potato fields. Attached to the rear end of the planting machine, the Dyker digs holes into the bottom of the furrows between the potato dams. 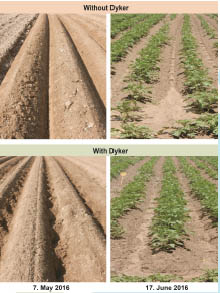 Soil erosion: More surface runoff in untreated furrows led to higher rates of soil erosion. In a steep section of a field, the average cross-sectional area of untreated furrows increased by almost 45% until the potato plant reached maximum vegetation cover while the changes during the same period were much smaller for treated furrows (24%).

Waterlogging: In addition, a series of drone photographs showed that less surface runoff also reduces the amount of stagnant water in depressions: while in treated furrows rainwater was evenly retained in small holes and infiltrated the soil locally, in untreated furrows it drained to the lowest point of the plot. In depressions, collected water caused saturation excess and anaerobic conditions, and resulted in crop failure. 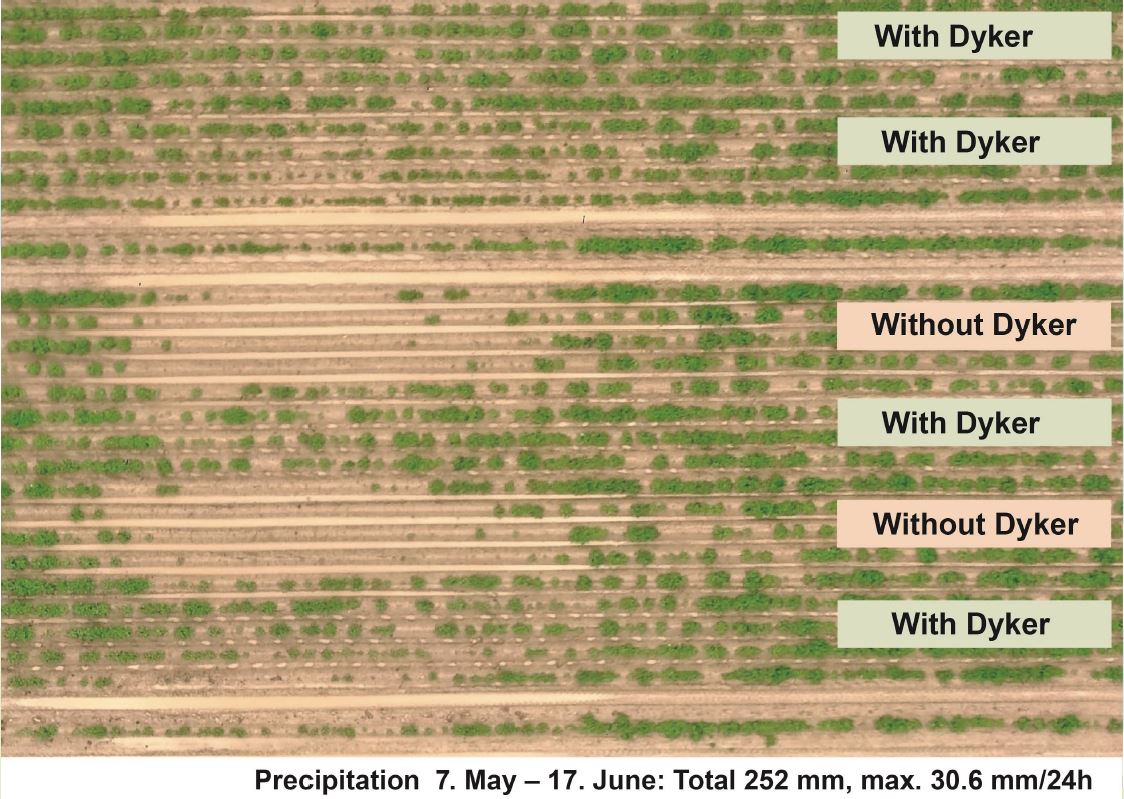 Below are links to national media articles about the experiment:

For more information about this experiment, please contact Felicitas Bachmaan  This email address is being protected from spambots. You need JavaScript enabled to view it.

The map below shows the Case Study area of Frienisberg. It is located about 20 km NW of Berne in the Swiss Midlands, with altitude ranging from 475 to 720 m above sea level (a.s.l.). It includes 3 neighbouring communes (Seedorf, Grossaffoltern, Schüpfen), covering approx. 56 km2. There are 189 farms managing in total 2,632 ha of arable fields. The area is characterized by moderate hill slopes. In a recent study, Prasuhn (2011) investigated 203 arable fields in the region with a total area of 265 ha. On these fields, a mean slope of 6.5% (range 1-25%) and a mean slope length of 68 m (range 15-210 m) were identified.

The main soil threat in the Frienisberg area is soil erosion by water. Sheet, rill and gully erosion in mixed crop-livestock farming systems are causing on-site damages (e.g. loss of the soil resource from agricultural areas) as well as off-site damages related to the deposition of eroded material downslope (e.g. water contamination and damages on public and private infrastructure). An agricultural field may be damaged by erosion occurring on itself or damaged by run-on from adjacent upslope areas or roads (Prasuhn, 2011). The effect of these damages involves economic and ecological costs for society (Ledermann et al., 2010). It is estimated that the costs of soil erosion are about 64-774 SFr. (or 61-741 €) per ha/year, and 70-80% of the costs occur off-site and have to be paid by the society. Main drivers include rough topography and agricultural practices that promote erosion.

Other soil threats
Due to the mechanized agriculture and tillage practices, soil compaction is also a serious problem, which has an impact on many soil properties and processes. Additionally, large amounts of eroded soil which deposit off-site, often related to slope depressions, are considered muddy floods and are frequently observed in Switzerland (Ledermann et al., 2010).

Most soil in the Case Study area are quite permeable Cambisols and Luvisols over ground moraine; they are mostly sandy loams which have been rated as having moderate erodibility (Prasuhn and Grünig, 2001)

The area is dominated by arable land, a typical land use of the Swiss Midlands (see picture below). The predominant family farms apply mixed farming methods of growing crops and keeping livestock. Crop rotations are versatile and mostly have a high proportion of temporary grass-clover mixtures. 40% of the 203 arable fields investigated by Prasuhn (2012) are planted with cereals and rape seed, 37% with root and tuber crops, and 20% with temporary leys (grass-clover mixtures). Winter intercrops are widespread; 90% of the arable land is covered with either intercrops or regular crops over winter. There are no further observations, but it is assumed that this land use is representative for the whole area.

The Frienisberg area lies in the moderate climate zone with an annual average temperature of approximately 8.5 °C and an annual precipitation from 1,035 to 1,150 mm. During the winter months there is usually some snow, which contributes to erosion after melting.

The Case Study includes a small wetland with a 1.73 ha lake, called Lobsigensee, which is primary fed by precipitation. The lake used to face eutrophication problems due to manure and fertilizer inputs but it is currently surrounded by a small nature reserve. According to law, surrounding stream banks are hedged by approximately 3 m wide grass strips, in order to be protected from phosphorus and nitrogen loads by leaching, surface runoff and erosion. Nevertheless, during summer heavy thunderstorm events, some of these streams cause floods on agricultural land and in settlements.

The main driver of soil erosion in the study area is the rugged topography with a large proportion of steep slopes. Many of these slopes are under forest and grassland and thus well protected from soil losses. However, mixed farming including animal and crop production is the most frequent farm type in the area. Especially winter wheat, potatoes, fallow, maize and sugar beet show high on-site soil erosion (Prasuhn, 2012). There are several reasons why these crops are widely produced in the region: Maize is mostly used as fodder and there is a good market for winter wheat, potatoes and sugar beet. Moreover processing of sugar beet is easy due to a sugar beet factory located in the nearby town of Aarberg. Prevention of soil erosion thus remains a challenge on cropland with intense soil tillage on steep slopes.

For a period of 10 years, the visible erosion features on 203 arable fields in the area were continuously mapped and quantified by Prasuhn (2011; 2012) (see picture on left). The graph on the right gives an overview of the soil loss measurements. Within this period a third of the fields showed signs of erosion. Although the average soil loss was relatively low (0.75 t ha-1 yr-1), the maximal annual erosion in a single field was 96 t. About 52% of the total erosion took place in the summer half-year. Linear erosion accounted for 75%, while inter-rill erosion took place only in 25% of the cases (Prasuhn, 2011).

Winter wheat ranks first with regard to soil loss and number of fields with erosion. Soil erosion is worse if the previous crop to winter wheat was potato, maize or sugar beet, due to intense soil tillage and little soil cover (Prasuhn, 2012). An important trigger of erosion was run-on from adjacent upslope areas. 50% of the soil was deposited in the field of origin, whereas 20% of the soil was transported into water bodies, thus contributing to their contamination (Prasuhn, 2011).

The "effectiveness" of conservation is defined in terms of how much it reduces the degree of degradation, or how well it is preventing degradation.  The Effectiveness trend indicates whether over time a technology has increased in effectiveness.

Data collected from the case study area for the project are held in a repository on the European Soil Data Centre (ESDAC) website hosted by Joint Research Centre (JRC).  Below is a list of the data held.

The following table summarises and ranks the expected effects of soil erosion on soil functions in the Frienisberg area. So far, there are no measurements in the area for validation.

While agricultural and environmental policies of Switzerland have been defined autonomously with regard to Europe, basic features of the respective European and Swiss policy frameworks are rather similar (e.g. high degrees of protectionism, direct payments for ecological and other services, strong presence of public regulation) (Schneider et al., 2009). The national ordinance on direct payments contains a clause that farmers who intend to receive direct payments must take suitable protection measures against soil erosion. Subsequently, cantonal authorities, such as soil protection agencies and agricultural offices, began to develop different approaches to implementing these regulations: they devised special control systems using soil erosion risk maps and agricultural inspectors, conducted training courses, produced information leaflets, and implemented financial support programmes for no-tillage (Schneider et al., 2010). A number of direct incentives are also provided to maintain the landscape’s touristic value, e.g. a typical mix of small plots, cropland and pastures, fruit trees, hedgerows, etc. Therefore, many farmers consider themselves no more as producers but rather as landscape gardeners.

Being surrounded by EU member states, the federal government with its agricultural policy 2014-2017 is striving for a stronger market-orientation. The mix of production and protection foci forces many small farms either to give up or to move into joint ventures with other farmers.

Left: Population in Frienisberg; Right: GDP per capita trends for Switzerland and the Euro Area.

Alternative tillage systems have increased since 2003 and in 2008 the no-tillage practice was applied on 17% of the arable land in the region, which is above the mean of 3% applied in Switzerland (Ledermann and Schneider, 2008). The popularity of no-tillage is due to financial incentives by cantonal supporting programs, innovative contractor farmers with personal incentives and social dynamics between neighbouring farmers who adopt successful technologies. The positive effects of soil conserving tillage practices and crop rotation have been confirmed through field mappings, where the mean soil loss in minimum and no-tillage fields is more than an order of magnitude lower than that under plough tillage (Prasuhn, 2012). Similar to off-site effects and impacts on ecosystem services, upscaling remediation measures under an integrated and watershed-scale perspective remains a challenge. Therefore, the consequences of the wide application of no-tillage for the socio-ecologic system and for the potential up-scale of remediation measures remain to be explored.

During the RECARE project stakeholder learning platforms will be established in order to facilitate knowledge exchange and mutual learning between the different actors from local to national level, including insurance companies and scientists. Innovative prevention and remediation measures as well as regulation options will be jointly identified and investigated in an open and interactive atmosphere.

Both men and women are invited to the RECARE stakeholder workshops, although in practice the participation of women in the workshops is lower than the participation of men. The workshop’s content, in relation to the treatment of soil and sustainable land management, is of particular interest to the men who apparently are more likely to be farmers. In a questionnaire, all male respondents were explicit that there is no typical role for men or women. If there are women involved, they are institutional, cantonal or federal representatives, functions that are also performed by men.

This web page is authored by: